I found this on Wikipedia.

William Jones started making sewing machines in 1859 and in 1860 formed a partnership with Thomas Chadwick. As Chadwick & Jones they manufactured sewing machines at Ashton-under-Lyne until 1863. Their machines used designs from Howe and Wilson produced under licence.

The firm was renamed as the Jones Sewing Machine Co. Ltd and was later acquired by Brother Industries of Japan, in 1968. The Jones patent for his popular Serpent Neck model appeared in 1879. These were manufactured until 1909. The machines pictured employ a transverse boat shuttle mechanism forming a lock stitch.

The CS Family model has "As Supplied to Her Majesty Queen Alexandra" written along the shoulder and like many Jones machines displayed very ornamental decoration ensuring that many are still kept in good condition as decorative items.

It measures approx 15" long and 9 1/4" tall. It weighs approx 8.6kg. It seems to work ok but is a little stiff. A lot of the wooden handle has broken off.

A Jones Family CS Machine from around 1935. Probably the same one that Herman has. 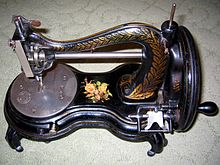 An early Jones serpent neck with a flower pattern from around 1890. This is the one on E Bay.