Dear Forum friends, I think it is my obligation to tell you what happened to me and my family when we returned from holiday in December as I do not want any of you to experience the nightmare we experienced.  For those of you who know me, will know that I am a perfectionist when it comes to anything I own with wheels.  About 10km from Strydenburg on Friday 5 February 2018, I suddenly heard a noise & when I looked in the mirror, I saw black pieces of what I thought at that stage was rubber flying in the air.  My immediate reaction was that a tire on my luggage trailer has burst.  Luckily & I did not slam the brakes and secondly, I was also only doing a 100km/h.

I let the vehicle slow down by taking my feet of the accelerator whilst keeping an eye on the trailer.  To my shock& absolute horror, I saw the trailer’s nose go down & then moving into the right lane with traffic approaching.  I then, in total disbelieve, realized that the trailer had somehow unhooked from my car and was heading straight on in a head-on collision course with the oncoming traffic.  Thanks to the capabilities of my vehicle, I could move to the left shoulder and onto the grass and in doing so, made enough space for two cars to pass between my car & the trailer.  The trailer stayed on its wheels and I thought we might be lucky, but as soon as it went off the road, the A-frame ploughed into the soil and caused the trailer to flip twice.

The lesson I learned and which I want to share with you, is the safety chain of my particular make of trailer did not do what my perception was that it was suppose do.  In retrospect, I know I made a stupid assumption that the safety chain was fixed properly to my trailer – one normally hooks the trailer onto the vehicle and slip the safety chain over the goose neck without thinking twice & you start your journey thinking that you have a safe guard should the trailer unhook for some unforeseen reason.  From the attached photo’s you will clearly see why & am placing this post.  The chain on this make of trailer (this make of trailer’s safety chains are all fixed like this, I did a study) is fixed to the bolt that also fix the hitch to the A-frame.  In my case, both bolts broke, thus making the safety chain nothing more than just an ornament hanging from the hitch.  According to my research, there are no SABS guidelines or law that states that a trailer below 750kg carry capacity even needs a safety chain, but this is what I want to warn you about.  PLEASE do not be under the wrong perception that, if you have the same make of trailer, the safety chain is going to assist you when the same happens to you as what happened to me.  Why the bolts broke, I honestly do not know as my trailer was never overloaded since I bought it brand new 5 years ago and also not on the day the accident happened.  We had 5 luggage bags in the trailer as well as my empty 90L National Luna Camping Fridge, thus a maximum 200kg load according to my calculations.  My trailer was also serviced annually as per the manufacturers recommendation.  In the photo of the 2 bolts, you can clearly see that the one on the left was halfway broken for a while as half of the bold has old rust.  I had it inspected by a Metallurgic Engineer friend.

So please, I urge you to take your trailer back to the manufacturer to fix the chain to the A-frame as this make of trailer, according to my research, is the only trailer whose safety chain is fixed to the bold of the hitch.  All others (as far as I could determine) is fixed to the A-Frame itself as you can see from the photo of my motorbike trailer as an example.  Again, I would like to point out that these types of trailers do not require a safety chain, BUT as it has a safety chain, I was wrongfully under the impression that the safety chain would assist in the event should the trailer become unhitched from my car in which ever way.  So, if you want this safety feature to actually help you in a situation where your trailer gets unhooked, please take it to the manufacturer to fit it properly.

The black pieces I thought was rubber flying, was tar that also caused damage to my back doors of my car and I had to repaint the doors.

PS: I contacted the manufacturer, but had no reply from them to date. 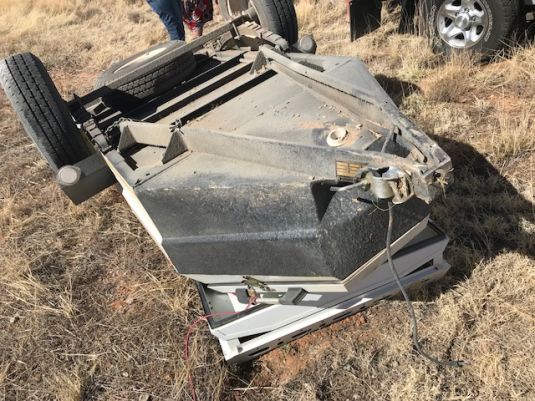 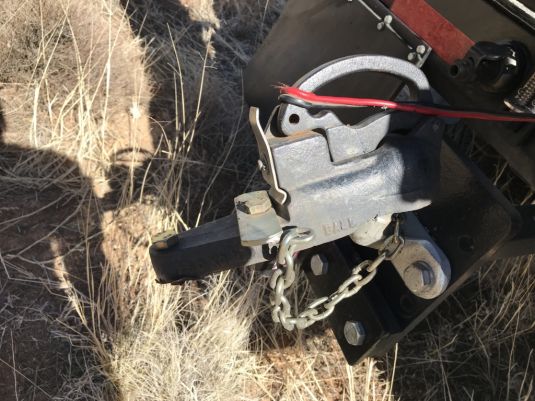 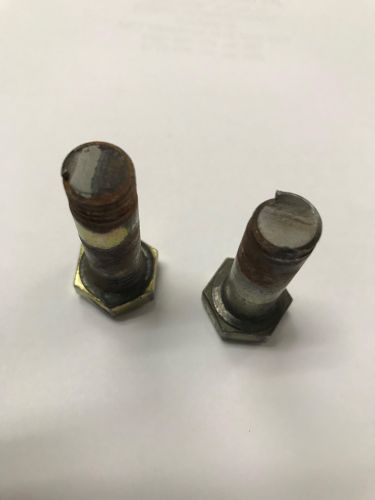 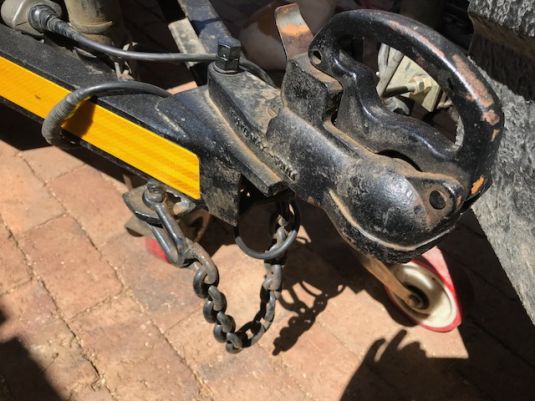 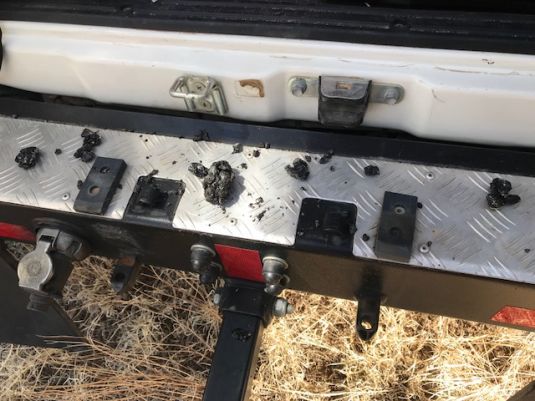 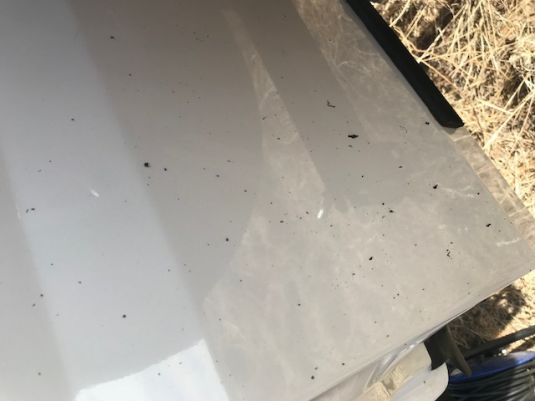 04 Mar, 2018 @ 14:52:15 pm
Anonymous
Paul, I would like to mention here that I know of and off-road trailer that unhooked as well, and twice!!! The funny thing was that it also did not have a chain, which was installed eventually. His trailer on both occasions rolled until it stopped without flipping over but still had damages. I saw the problem with his trailer coupler is that it does not clamp under the ball but directly to the ball and then working the ball until it weared so mush that it just clipped off..

I see there is a great deal of safety issues on caravans and trailers and no one seem to care to take matters further..

I also saw an offroad caravan that had the bolts holding the spring leaf assembly break off because the spec was too small.... That can also cause major accidents..

Hi Paul.  Welcome to the forum and a BIG Thank you for sharing this information with us.  Everyone sits with the perseption that if a trailer or caravan will beome unhitched, it will mainly be due to the wear and tear of the towball and hitch.  We do not keep in mind that the actual bolts can be of fault like in youre case.

I for one have no clue as to what manner the safety chain is attached to the small fishing camping trailer I have. Due to your contrabution I will surely go and have al look and fix it if its wrong.

My caravan though has a safety cable that would activate the caravan brakes in the event of a split during towing.  I prefer it this way for reasons of my own.

Welcome to the Forum. Sorry to hear about your damages, just glad nobody got injured.

This is a very informative post. I think we did have a discussion previously regarding safety chains. If I remember correctly I mentioned that we need to make sure that the chain on Vans should be able to carry a minimum weight of at least 2T.

Never tought of the bolts holding the hook. This should also be High Tensile Bolts and nuts with a capasity of at least 2T.

How many of us do check these bolts? How many times do we "torque" the bolts on the towbars? Yes, most of us check the wheels, but the hook and towbar is the "weakest point" on a rig, and should be the most important items to be checked.

With your post you have highligted a "neglegted" point and you have opened the eyes of many of us.

Some vans these days do have "safety cables" These should also be able to carry a weight of 2T. If that van get un-hooked, a cable that cannot hold the weight WILL snap. I also have one of them on my van and I DO NOT TRUST IT. It is thinner than a pencil. On the Mines and in Industry  a SWR (steel wire rope) with a Safe Working Load is at least 8 - 10mm thick. When I get time, I will take it off and get it tested to see what load it can carry before it snap.

Thanks for the positive comments. I have now managed to add more photo's (still learning to use the forum). My idea with the post was to warn people. I agree with all the valued comments you made and yes, I was always fanatic about checking the wheel bearings as you see so many people sitting beside the road with wheel bearings that packed up. Yes, you are correct, the chain is too thin & should be much stronger & yes, one should check the bolts more often, but I took the trailer for annual services as per the manufacturer;s reccommendations. Surely replacing these bolts (they are dirt cheap) should be standard during the annual service? I know other trailor manufacturers does it. Paul thank you and welcome. I have built and repaired a number of trailers and appreciate the trouble you have gone to. For you and other members info please be aware that there are different quality bolts some which can endure greater stresses than others. A good rule also is that allen cap bolts (need an allen key) have the higher ratings. It would be a very good preventative measure to replavce these critical bolts irrespective. Your bolt and nut supplier can assist you with high tensile bolts. I would use flat washers on either side as well as nylock nuts and they should be checked during a service. The next critical bolts are the ones that hold your leaf springs in place and these should also be replaced as a preventative measure. Should these leaf spring bolts fail your axle would move and could cause a serious accident.