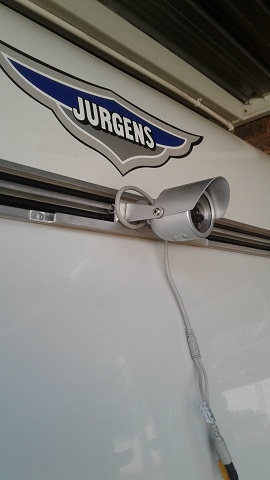 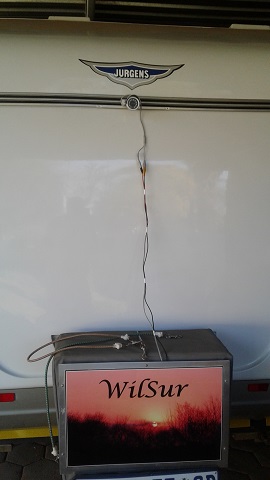 But seriously? I don't have a hard & fast rule.

My perspective: - I'm in front, I'm in control, you can lump it or leave it, it's my decision.

If I'm 100 % certain the verge (between the yellow line & edge of the tar)  is wide enough & clear vision for long enough including these not so obvious ones like weather / curves to the left ahead / road conditions: -

Mostly though what I will do is: -

When I notice a vehicle behind I will acknowledge with my flashers, &  indicate with my right indicator that the roadway ahead is clear for overtaking.

It's up to him to understand, tough cookie if he doesn't I recieved this information from the President of CCSA a good many years ago.

I still adhere to this ruling. As a matter of interest, between 2002 and 2012, I was an Assessor for the Tourism Grading Council and spent most of my time towing a caravan all over the country assessing caravan parks for Star Grading. I covered (towed a caravan) around 25 000 (twenty five thousand) kilometers a year, stayed on over 80 odd caravan parks a year, and called in on about 150 caravan parks a year. Hence the name : "The Boring Camper"!

Moving over into / driving in the yellow lane.

This is a controversial item. However, the legal interpretation as per the authorities is that 'you may not drive to the left of the yellow line, on the shoulder of the road or in the emergency lane at any point in time, other than in the case of an emergency.'

Having said that the authorities have indicated that it would be most unlikely that a caravanner would be prosecuted for driving in the emergency lane in order to allow faster traffic to overtake. This 'un official concession' would only be applicable to single lane type of roads, and not on a highway or multiple lane roads.

If it so happens that the traffic flow slows down to such an extent that a caravan travelling in the yellow lane travels faster than the main flow of traffic, it could be construed to be overtaking other traffic in the emergency lane! In the event of an accident etc. that causes traffic to come to a halt, this could well mean that you will also be at a stand still within the yellow lane. If emergency vehicles are as a result obstructed, say no more!

In all cases fines for offences committed around the yellow lane zone carries stiff penalties, and R500 in some provinces or municipal area's could be considered cheap. I totally agree with other motorists towing a caravan with as far as his frustrations are concerned, and to add just one more point of contention to this issue: - When the yellow lane narrows or there is an obstruction preventing you from continuing, just try and get back into the flow of traffic! The abuse suffered and frustration endured outweighs the vexation of the faster travelers by far.

Having said that, all members of the Caravan Club of Southern Africa are bound by a code of conduct, and I quote rule three which has relevance: 'To cause as little inconvenience to other traffic as possible by keeping well to the left or giving way to faster traffic and to travel at a reasonable speed considering the condition and width of road etc.' Club members are thus encouraged to give way (yellow lane travel) but without endangering themselves or exposing themselves to prosecution. All Club members will adhere to this rule, but many will not travel in the yellow lane, mainly due to personal reasons.

I trust that this resolves the matter? I doubt it very much as we all have our own opinion on the matter. The legal aspect remains, no matter what our opinion may be.

Sorry Willie, not quite the last... 16 Aug 2016 @ 12:47:03 pm
trevorg
Silver Member
62% Profile Strength
Posts: 79
Joined: 14 Jul 2016
Experience: 7 years
A controversial topic that must have come up numerous times .
I think Leon has it spot on with his
1.Die teer en oppervlakte daar, dit toelaat.
2.Breed genoeg is.
3.Dit duidelik en vęr genoeg vorentoe skoon is.
4.Glad nie gedurende die nag nie.
just a thought about punctures that can be picked up from driving in that yellow lane .
Some motorists expect you to pull over but how wrong they are its your choice you paid lots of hard earned money for your caravan and if you do pull over there will always be that risk element especially if there are cyclists and pedestrians in that lane .
on Friday I stopped at a pedestrian crossing to allow children to crossover and a lady in a car passed me with a great speed and failed to stop at the pedestrian crossing she narrowly missed two children and her side mirror hit the one child .
luckily he was not seriously hurt it could have been fatal for those children . 16 Aug 2016 @ 16:33:07 pm
Campervan
Uranus Member
96% Profile Strength
Posts: 2830
Joined: 27 Oct 2013
Experience: 42 years
Agree with Nico and Leon,
You do not know what stresses or emergencies the guy behind you has. It is not worth causing an accident because only you have all the rights. This is the problem in our societies these days, we think only of ourselves and our rights.
The guy behind you could have a medical emergency or some other emergency which they could do nothing about and which you know nothing about. Why be a frustation to them. I agree, most people in a hurry only have themselves to blame, but this will not solve the problem by being the cause of a major accident which could then also involve you, the inconsiderate driver.
If you have space and it is safe, move over. This surely cannot be such a problem.
I drive slowly and will always open the road for faster traffic and expect the same from other road users when I have places to get to in a certain amount of time.
You must know how frustrating it is to sit behind a person who hugs the centre line. Just to drive with your left wheels next to the yellow line helps a passing driver to get past quicker and safer as opposed to be hugging the centre line.
Just my two zuptas worth.
On The Road Again
👍
0
💔
0
😮
0
🙂
0

Bly maar in my baan.

Gustav
Work interferes with my Holidays