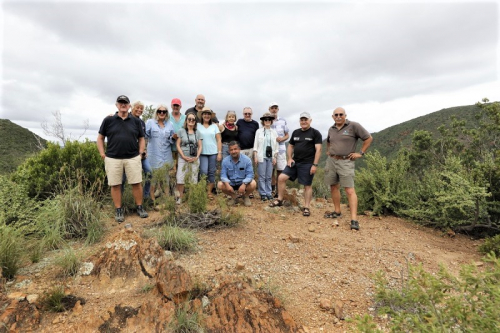 So the days melt into each other and it's easy to forget which day of the week it is. We're sleeping longer. There's no traffic noise. No sirens. No burglar alarms. But enough is enough. It's time to shake up this torpor of business inactivity. The garage has been cleaned. All the odd jobs are completed. We need to become productive citizens again.

The national lockdown has affected each and every one of us in different ways. At the time of writing, we are all waiting with bated breath to see what the next step is going to be and exactly when our lives will return to normal. With the oil price in the US being at 1 cent per barrel, it's a sure sign that the world is not in a happy place right now, as uncertainty makes people keep their wallets and purses firmly closed.

We appeal to all of you to support small businesses wherever possible. These are entrepreneurs trying to feed their families and pay their bills. The big corporations can see a few months through, but small businesses with cash flow problems can easily fail. They are going to need your support for the next year or two as we all try and claw our way back towards some level of normalcy.

The world will get over the Corona virus. Surround yourself with positivity and now is a great time to plan a trip - or book a tour. We have considered introducing a number of 1 day tours which will be affordable and of course, since you are in your own car, you are technically in isolation. We are working hard on putting together a new set of one day specials. Due to the obvious distance limitations, these will be restricted to the Western Cape at this stage. We will release more details after April 30th.

It rained all night with the storm peaking at 05h00 with some wild gusts and heavy downpours. Our sweep driver, Philip, who had experienced brake failure two days before, had risen early and driven through to Patensie to get his Navara’s brake problem sorted out, but there was no workshop in the village with the spares or requisite skills, so he continued through to Humansdorp, where he was ably assisted.

The Woodhead’s and Lenahan’s had also risen early, each needing to get back home to attend to business and other matters, so intrusively invaded into our plans by Mr. Corona.

In the meantime the rest of our convoy, now reduced down to just 5 vehicles, left at 09h00 for the start of our last day. A fairly long day which would end at Steytlerville.

But first we had the pleasure of starting our day with a west-east traverse of the beautiful Grootrivierpoort. The road is virtually flat for most of the distance, but there are many corners, which force a slower speed, which is a good thing, as the scenery in the poort is simply magnificent. Near vertical cliffs tower almost 300m up into the sky, hemming the road and the river into the confined kloof. Low clouds allow shafts of sunlight to illuminate the forests and mountains, setting a grand spectacle. The road dips in and out of dense riverine bush as the Grootrivier flows lazily eastward in a broad, brown band in the middle of it all.

Vervet monkeys and bushbuck dart furtively into the bush as our convoy rumbles slowly by. The Grootrivierpoort was one of Thomas Bain’s final road building projects and it’s wonderful to see the road still being used, and it's virtually unaltered 135 years later.

Of interest is that the road between Port Elizabeth and Cape Town through the Baviaanskloof is the shortest routing between the two cities, but definitely not the fastest!

As we exit the poort, the view opens up over the Gamtoos River Valley. Here there are citrus orchards by their hundreds of thousands. It is also the point where the Grootrivier and Kouga River form a confluence and the name changes to Gamtoos. It’s only when one drives through this valley that the size and scope of the citrus industry here hits home. Packing sheds and muddy tractor trailer combinations bustle between the farms and the old narrow gauge railway, now forlornly overgrown, crosses our road, which had quietly changed from gravel to patchy tar.

But first we have a destination with the local dam. We turn right and drive through more citrus farms, then turn right again heading back into the west and up into a mountainous valley. Our early morning goal is to have a look at the Kouga Dam. This dam which dates back to the 60’s and won several engineering awards at the time, was originally named after Paul Sauer – the same Paul Sauer after whom the Storms River bridge over the N2 was named.

Sauer was born in Wynberg near Cape Town in 1898 as the third child of Jacobus Wilhelmus Sauer and Mary Constance Cloete; he also had two sisters. Sauer's middle name came from his aunt, Olive Schreiner. When Sauer was six years old, the family moved to his father's farm, Uitkyk, in the Stellenbosch district. Initially, Sauer attended school at a neighbouring farm. At the age of eleven, he went to SACS in Cape Town where he became head boy of Rosedale house and captain of the first rugby team . At the South African College, where he enrolled for the BA course in 1916, he argued in the debating association for South Africa to become a republic. Because of this debate and the large number of Afrikaans students at the time; he was elected to the Students' Council. After two years at SA College, and without completing the BA degree, Sauer, became the first enrolled student at the newly established Faculty of Agriculture at Victoria College, Stellenbosch. He obtained a diploma in agriculture with distinction. In 1921, he went to farm for his mother on the farm Uitkyk. In 1929, his mother sold the farm and he kept Kanonkop, which was part of Uitkyk, as his inheritance and continued to farm there.

In 1929, he stood in Victoria West as candidate of the NP. Four years later, he was asked by the NP from Humansdorp to run for office there in place of the recently deceased minister Charlie Malan. He did so and represented Humansdorp until 1966 as member of the House of Assembly. It stretched from the Van Stadens River to Plettenberg Bay and also the Kouga River and the Langkloof. He then became a senator, a position he held until 1970. This means that his parliamentary career spanned 41 years, as long as his father's. However, he remained as vice-chairman of the Cape NP until 1972, before finally leaving active politics.

Our drive towards the dam wall was interrupted by warning signs that we required a permit. This rule was not in place when I visited the dam in 2010. All attempts at locating the admin building to obtain the necessary permit were in vain, so with all the gates open we headed up the steep slope towards the dam wall.

The road skirts a lovely lawned picnic area with old, but clean ablutions, before swinging to the left and climbing steeply. The surface is reasonable gravel and soon a tunnel appears ahead. The tunnel is not long, perhaps 100m or so, after which the road levels off onto a large viewing deck. The level of the dam was just 16,4% - a sobering reminder that many parts of South Africa are still suffering under drought conditions.

Whilst photos and videos were being taken, I managed to get hold of Philip by phone who reported good progress on his brake repairs and informed us that he would reconnect with the convoy an hour later in Patensie.

Photos and videos done and dusted, we retraced our route back to the R331 and turned east towards Patensie. Along this stretch of road there are two noteworthy points of interest and drivers who are unaware of them can easily miss out. 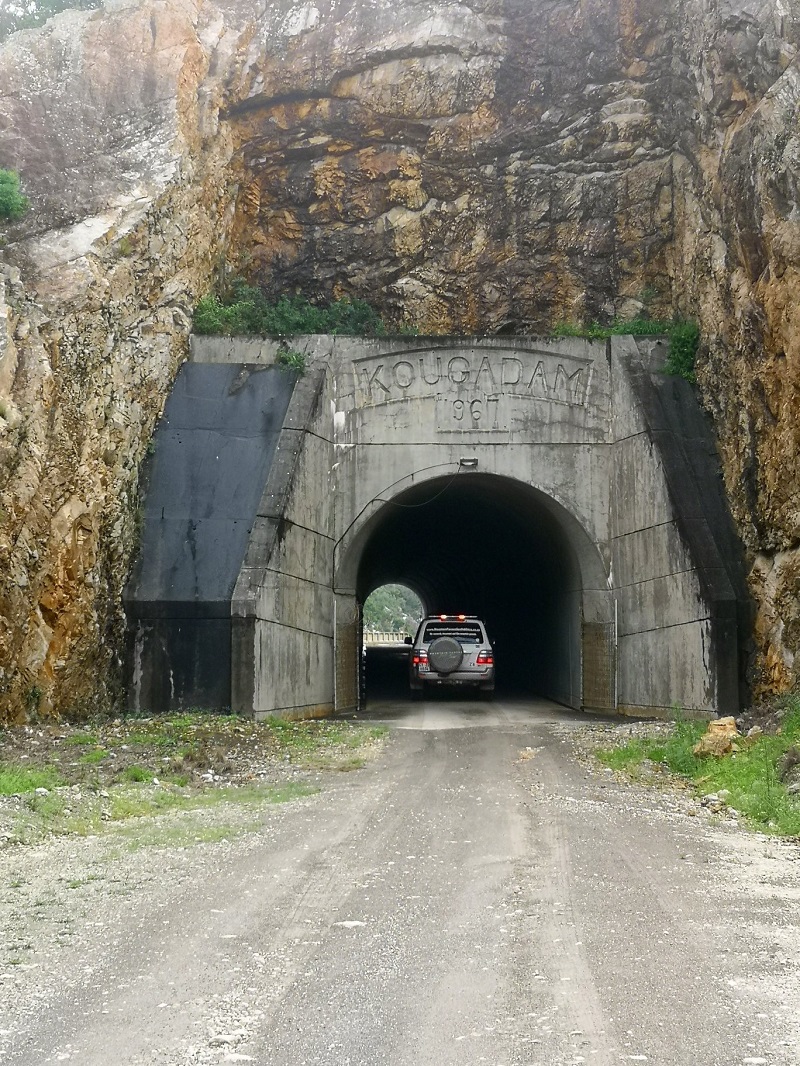 The first is a weathered piece of cliff on the northern side of the road, which strongly resembles the profile of Queen Victoria. It is best viewed travelling from west to east. Unfortunately there is nowhere safe to stop and the little road, which has no safety shoulders, carries a steady stream of trucks, tractors, farm bakkies and minibus taxis, making it dangerous to park partially on the roadway.

The second point of interest is the vertical cuttings through a section of Enon conglomerate which is downright scary to look at, as it seems as if the big round boulders will easily fall out of the sandy matrix onto the road and possibly onto your vehicle, but the reality is that it is extremely weather resistant and explains why there are no rocks in the kerbside and also how the engineers were able to cut the matrix so vertical without any danger of the slope collapsing.

Onwards to the farming town of Patensie, where we all refuelled and topped up on basic provisions for the day at the Agrimark. The village is a low key affair, with lots of mud, and farm folk going about their daily business, but halfway up the hill on the main road to Hankey is a really good coffee shop known as Tolbos. Besides good food and delicious coffee they stock the finest marmalade and other home made treats.

Philip joined us by 12h00 and we were back up to 6 vehicles. Our second pass of the day was the Geelhoutbos Pass – a long winding gravel pass with comfortable gradients and sublime views. It climbs 740m up to the main ridge of the foothills of the Winterberg mountains, escalating this pass into the upper echelons of altitude gaining passes in SA. The heavy overnight rain ensured that we would be doing some slipping and sliding, but with 4WD engaged, no problem! There were big smiles on everyone’s faces once at the top. This wide, gravel road was to be the last of the smooth roads for a while, as this would be where we would switch onto a long and bumpy jeep track which would take us west via the Antoniesberg Pass to our destination of Steytlerville.

We remain in the Eastern Cape as we take a drive along the fabulous Kei Cuttings, which at the time of construction in the 1950's was an amazing piece of road engineering. The pass, which is officially known as the Great Kei River Pass, is a dangerous pass, with long, momentum gaining descents which regularly result in trucks and buses losing their brakes. Two arrestor beds have been added to the upgraded version of the pass and the old bridges upstream of the N2 bridge make for great photographic opportunities and are steeped in history.

Kareedouw Pass - connects the N2 with the R62 on the R402. An easy pass offering lovely views of the Tsitsikamma and Kouga mountains.

Words of wisdom: "Many of life’s failures are people who did not realize how close they were to success when they gave up.” - Thomas A. Edison

Thanks I love your posts