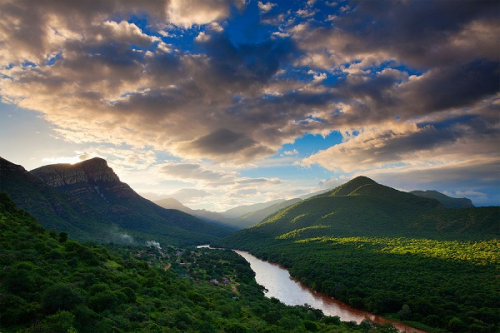 THE WEEK THAT WAS

* King of the Mountains

* Can-do South Africans to aspire towards

Our upcoming Ben 10 V3 Tour has sold out in record time. We will not be running another Ben 10 Tour this year, but will be scheduling the next one for 2021. Tickets for our Kouga Baviaans Explorer Tour in March are selling well with 6 places left at time of writing. We are convinced that this tour is going to be pure magic and quite possibly the best tour we've ever put together.

Next week we will be heading off to the Wild Coast to do the detailed recce/planning for our longest tour to date: Wild Coast Adventure Tour, which will be held from the 12th to the 20th June, 2020. Keep an eye on our Shop & Tours page for when bookings open.

The Ben 10 Eco Challenge has an almost mystical allure to it. To date 257 people have entered the challenge but only 157 have managed to complete it. There have been some interesting entries. A father and daughter completed the challenge on single speed homemade bicycles on a budget of R20 per day; a motorcyclist rode all the passes in a single day; a man entered the challenge under the name of his dog (see Scruffy de Jager); and recently another dog actually ran all the passes with his owner - ironically the dog's name is Ben!

King of the Mountains

But there is one man who is a step or five ahead of the pack. He is Jaco Pretorius from Pretoria who ran the challenge last year thereby becoming the first runner to complete the event. Jaco was so enthused by his experience that he has decided to expand his challenge. A few weeks ago he tackled the Ben 10 on an MTB and a 4x4 - riding each of the passes first on his bike followed by the 4x4. And if that's not enough, he plans on completing a four way title by also doing the challenge on his adventure motorcycle. Today we feature the first chapter of Jaco's story of how things went.

It all started in September when I completed the Ben 10 Challenge as a runner. While running those last passes, the idea of doing a “Grand Slam” attempt on the Ben 10 was born: To do Ben 10 in all 4 ways: On foot (done), with Bicycle (MTB), 4x4, and Motorcycle.

My planning gained momentum in November, and the next step was to book my accommodation. I was going to attempt it with 6 wheels (2 on the MTB, and 4 on my 4x4) over the New Year period. As it was my summer holiday, I did not want to rush it, and booked 6 nights to be able to still enjoy the magical scenery of the area. 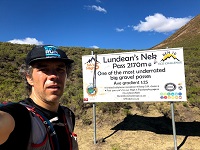 Jaco doing a selfie during his run version last year

28 Dec was going to be my first day. I left Bloemfontein early on Saturday 28 Dec, planning to do Joubert’s Pass, Otto du Plessis Pass, and Barkly Pass on my way to Mountain Shadows Hotel. We had stayed there during my running challenge and it is simply a marvellous place. The idea was to try and do all the passes in both directions with the Mountain bike (MTB), and then cross over with the bakkie. Everything went well on those first 3 passes, with some rain experienced on Otto and Barkly. I finished that evening at about 19:00 satisfied that all was going as planned.

The next day was set aside for Bastervoetpad Pass only. Morning came and it was a rainy day. I decided to first do it with the 4x4, and then later, when the rain had cleared a bit, with the MTB. For some reason I opted to do it from east to west. At stages the rain was coming down quite hard, but it cleared a bit right at the start on the eastern side, allowing for a nice bush breakfast to be enjoyed. Once going, I soon realised that this pass was way more technical than what I remembered from September when I ran it. Within the first kilometre or so, I remembered that I still had the drop-plate attached to the tow bar. Not a good idea, and I had to stop and remove it. Luckily I had my toolbox with me. Once past the farm house, the rocky sections were soon replaced with muddy sections. Lots of mud!

At about 7 kilometres in, I encountered a steep, muddy section, where my (normally trusty) Hilux began to slide down and to the right into a trench. While trying to get out of the trench, a Land Cruiser came from ahead, and assisted me with directions on how to get out of the trench. They convinced me to rather turn around, as there was an even more slippery section to come. Not wanting to damage my vehicle, I followed their advice, and went back to the eastern end where I started. In hind sight, I should have started the day with the MTB, as I can now state that doing the technical passes was much easier with the MTB compared to the 4x4. One has only has one line to pick with a bicycle, and with a full suspension MTB it is much smoother over the rocky sections. This was proven too on some of the other passes that followed. As it was, I took the rest of the day off, knowing that I will have to come back for a second attempt at Bastervoetpad. It was nevertheless still a very beautiful experience, and I learned a lot about 4x4 driving over technical terrain.

On Monday 30 Dec, I headed north to do Lundean’s Nek, and Volunteershoek Pass on my way to the next accommodation at Tiffindell. To save some time (as birding along the way took a lot of time), I decided to do Lundean’s Nek from south to north in the bakkie, and cycle it back. (While my co-driver would drive the bakkie back to the start). The southern end was a bit washed away from the rain, making the 4x4 part a bit slow, but it provided a fun descent with the MTB.  It was one of the easier passes with the MTB, as it was not very steep,

Volunteershoek Pass was a different kettle of fish! The ascent was extremely steep, and the erosion-preventing-speed-humps made it feel even steeper. I had lost momentum, or encountered difficult sections at least three times where I had to get off and push the MTB for a while. Cycling it down was fun, but scary at times. There was a stage where I wondered if the brake pads will last. It was the first time that I smelled the brake pads on my MTB. With the bakkie it was fairly easy to do the pass upwards. Low range made it quite easy to ascend the steep sections.

Once at Tiffindell, there was only time to do Ben MacDhui Pass with the bakkie. It is a short, steep, and technical pass, with the most awesome views as reward.

(Next week we will publish the second part of Jaco's story)

12 Achievements by South Africans during 2019 (and more next week!)

Whilst it's so easy to slide into apathy about load shedding and politics; feeling sorry for ourselves, focusing on all the wrong things, here are a few achievements you might or might not have heard about which might help in getting mindsets a little more positive.

1. Hermanus listed as the best Whale watching holiday in the world

2. South African artist gets artworks featured in the London Underground

5. South Africans are the 6th sexiest nation in the world according to travellers

9. A little Joburg neighbourhood has just made it onto a list of the Top 50 in the world

A chat about the planned Wild Coast Adenture Tour in June

Featured pass of the week

Today we take a look at the life and times of able Abel. Our double video set on the Abel Erasmus Pass takes a peek into this well respected man's achievements. Although it's a tarred pass and carries heavy traffic, the scenery is magnificent as can be seen in the videos. Sit back, relax as we cyber drive to Limpopo province and dig into the history.

Words of Wisdom: "Obstacles are the cost of greatness" - Robin Sharma