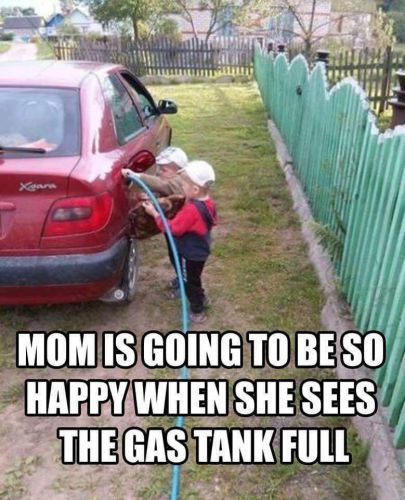 My son did that once, when he was about three years old.  Filled my tank with water.  Fortunately my husband saw it happening. A family member overslept one morning and had to rush the kids to school. Being so late, she decided to take a chance and left in her pyjamas and slippers. After all, she wasn't going to get out of the car.

The kids were dropped off only slightly late. On the way home the low fuel level light came on.

The very clever fuel attendant then proceeded to fill the diesel vehicle with petrol..........

In the 1970's, I was manager for an office equipment company in Empangeni, and at that time the Richards Bay Coal Terminal and Harbour was under construction. I had the contract to supply the Coal terminal with their typewriters, photo copiers and calculaters. During that period, there was severe petrol restrictions, and I jokingly mentioned to one of the big wigs in the Laborotary at the coal terminal that they should invent a way to drive a car on water.

This guy then proceded to explain how a conventional petrol driven vehicle CAN be equiped with a converter of sorts to drive on water instead of petrol!

This in around 1975! It is now a reality, but not a viable proposition! Our major petrol manufacturers will NOT let it become a reality!

Willie, please tell us how you are doing these days?   Are you enjoying your "retirement" or is that only in name?