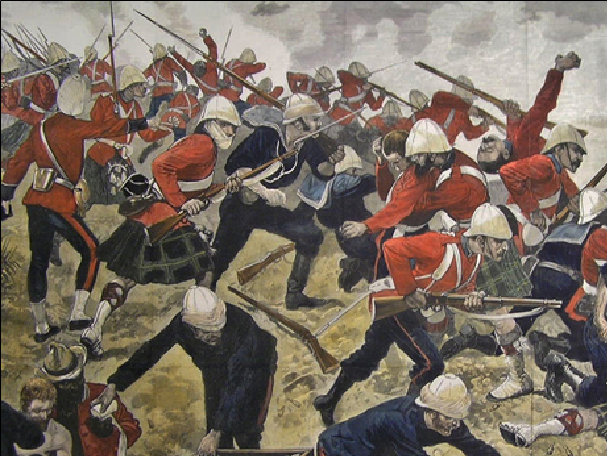 Having originally discounted the interior of South Africa as worthless, the British became increasingly perturbed by the discovery of diamonds near Kimberley and the early gold strikes in the Eastern Transvaal. Even though they had recognised the independence of the Boer Republics in 1852 and 1854, they now arrogantly decided to rescind their decision.

On 12 April 1877 a proclamation of annexation was read out in Church Square in Pretoria, the capital of the ZAR. Although highly incensed by this, the ZAR Volksraad (government) initially decided on a path of passive resistance, and sent a number of delegations to London to argue their case, but to no avail. The UK government insisted that the ZAR remain under British authority.

Realising that they had no other option, the Boers began to prepare for active conflict. They surreptitiously surrounded the six British garrisons that had been established in the territory after the Anglo-Zulu War, then waited for an excuse to start hostilities.

This came when a farmer named Pieter Bezuidenhout refused to pay extra fees on his wagon, saying that he had already paid his taxes. The British authorities then confiscated the wagon and his oxen. On 11 November 1880, a commando of 100 men under General Piet Cronje took back his goods from the British bailiff and returned them to Bezuidenhout.

Following this event, between 8,000 and 10,000 Boers gathered at Paardekraal, near Krugersdorp. A triumvirate of leaders was appointed, and on 13 December 1880 they proclaimed the restoration of the ZAR. Three days later they raised their flag at Heidelberg, thus rejecting British dominion and precipitating a war.

The fiercely independent Boers had no regular army; when danger threatened, all of the men in a district would form into loose groups called commandos and would elect their own officers. Being civilian militia, each man wore whatever he wished, usually everyday dark-grey, neutral-coloured, or earth-tone khaki farming clothes such as a jacket, trousers and a slouch hat. Each man brought his own weapon, usually a hunting rifle, and his own horse. The average Boer soldier had spent almost all of his working life in the saddle and was both a skilled hunter and an expert marksman. Boer commandos could also live off the land, negating the need for supply lines. [Look for Part 3 lower down)