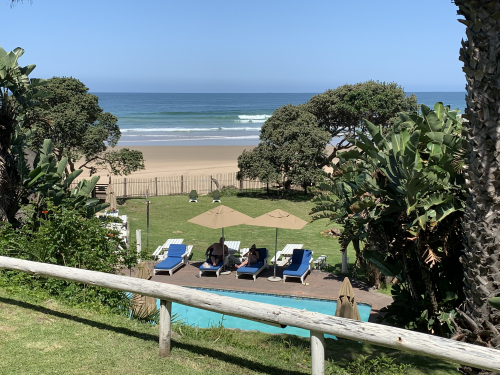 I'm sure like all of you, we are getting tired of reading about Corona/Covid 19. I tend to sit back and watch what develops on social media and to the astute observer, a lot can be read between the lines. There have even been several really positive things that have come out of the mess.

On our Facebook page we ran a post asking people to name one thing positive that the pandemic had created in their lives. The response was overwhelming and heart-warming to say the least, with the winning comment coming from a young wife: "I have my husband back from working overseas and my daughter is home from boarding school" That is special.

On the far side of the scale is the so-called 'egg challenge'. The challenge appears to be popular with a certain group of the population, but appears to have no purpose other than to be silly. The lockdown boredom has set in, it would seem.

Mainstream and social media remains awash with wildly conflicting opinions, mostly written by highly qualified professors, each one contradicting the other. Speculation and conspiracy theories abound, leaving the average Joe and especially those that are gullible, to want to reach for the panic button.

One of the most bizarre of these conspiracy theories is that the Covid-19 virus was manufactured in a lab in Wuhan, China and spread around the world intentionally to provide a distraction for the surreptitious installation of 5G towers, through which the superpowers will be able to control and spy on us. The scary thing is how many people worldwide actually believe this.

From our perspective, we try and sort the wheat from the chaff and keep our feet firmly on the ground, as we try and plan the way ahead, particularly in respect of our tours.

We have rescheduled our Wild Coast Tour to August 6th - 15th by which time things should have settled down sufficiently for us to run an enjoyable tour in early spring. We are just awaiting confirmation from all the hotels, but are expecting them all to cooperate fully.

Today would have marked the final day of our Ben 10 V3 Tour which we were forced to postpone (due to Covid 19). We have rescheduled this tour to September 23rd to 28th.

After a pleasant 40 minutes enjoying a light lunch break at the Doodsklip picnic site, we tackled the next pass - the Holgat Pass. Realistically the Holgat and Combrink's Pass together form one long pass separated by a 6 km long plateau in the middle. We have never found out why the ascent and descent have two separate names.

The Holgat Pass is easily the tougher of the two. It's tough because well-meaning road repair crews have (over several decades) decided to improve traction for non 4WD vehicles by laying cement strips along the climb. These have broken up over time and been repaired several times, with the net result is that the road is most uncomfortable to drive on. The steep gradient, which would normally be driven in low range for better control at low speeds, now has to be driven in high range to avoid axle windup on the hard surfaces. In short, it's a mess, but the magnificent scenery nullifies all of the above as the convoy doddles up the pass, all the while enjoying, proteas and fynbos in abundance interspersed with jaw dropping scenery.

On the left hand side we get a perfect view of the stand alone peak - Langkop, which is surrounded by dense bush and half a dozen streams all feeding into the dominant Baviaans River. Finally we take the final right hand bend to reach the summit point which is marked by some signboards, which also mark clean toilets available.

But the main attraction here is on the opposite side of the road, where an overgrown track leads westwards down an easy slope to reach the Le Roux cableway. The rain has settled in and umbrellas and rain-jackets save the day as we all do the walk down to the cableway.

The cloud-base is low obscuring the length of the cableway somewhat, but the great dizzying depth of the Waterpoort is unmistakable. We estimate the distance to the other side of the deep gorge to be about 400m. Cast your mind back to 1961 when Winston le Roux (who is now 84) and his father constructed this amazing bit of home-made engineering.

The big issue would have been getting the messenger line across. There were no carrier rockets available in those days, which meant someone had to clamber down the gorge (a highly dangerous exercise), cross the river, then climb up the far side all the while lugging a rope of considerable mass and length.

Once the main cable had been hauled over the chasm, (presumably using a tractor) the farmers were in business. A basic metal cage of about 2 cubic metres was used to transport goods, produce, livestock and sometimes even people. The cage was hauled across the cable employing a tractor which powered a basic winch. The cableway sliced a full two days travel off the journey from Enkeldoorn to Patensie. If ever the phrase ‘n Boer maak n plan’ rang true, this is a perfect example. 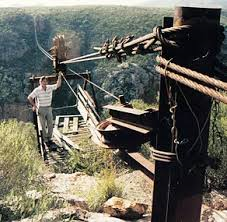 Winston Le Roux at his cableway

Back in our vehicles we crossed the Bergplaas plateau in steady rain, then began the descent of Combrink’s Pass. This beautiful drive so often has drizzle, cloud and rain about, but it was light enough to still make the drive highly enjoyable. This pass is very similar to the eastern section of the Grasnek Pass.

Strange euphorbia type plants had our guests eagerly looking up their reference books to try and identify the various species. All too soon we reached the bottom of the Combrink’s Pass and entered the fairy tale world of ‘Poortjies’. This is a section of about 6 km through a thick indigenous forest interspersed with regular river crossings. Here we spotted some vervet monkeys.

The exit of the bioreserve requires a signing out procedure and once again the staff at Eastern Cape Parks were friendly, efficient and helpful. Immediately after leaving the exit control point, the route enters the Cambria Valley, so named for its similarity to Cambria in Wales. Hundreds of thousands of citrus trees fill the valley with that distinctive aroma of oranges. Citrus farming is the main commercial and agricultural activity in this area and supports a large number of people. High quality water is a prerequisite for citrus farming and the Gamtoos River is the source of the water here, but more importantly the Kouga Dam is where the water is stored. We were scheduled to start our final day with a visit to the dam.

After about 8 km we reached the confluence of the Ys and Grootriver. From there it’s an easy drive along the southern side of the Grootrivierpoort before we reached our next overnight destination at Bruintjieskraal. The farm accommodation consists of four ample sized chalets spread out over discreet distances on the hillside, as well as excellent camping sites adjacent to the river.

As we drove into the Bruintjieskraal property, the rain came down in torrents. We had made good time throughout the day, leaving us with a few hours to relax and have a shower, before congregating at the lapa for our evening’s festivities.

It rained non-stop, but not enough to spoil our evening. One of our guests was unable to complete the final day and were due to leave the group the next morning and after the farm owner arrived to check if we were all comfortable, he also gave us the bad news about the Corona virus story. Another couple in our group, who are in the international travel business, also had to make the agonising decision to depart the group. That reduced our convoy size down to 6. On that basis, we decided to bring our Chappies night forward and an evening of royal festivity was enjoyed by all, with a new game called ‘Pennie Knyp’ being introduced by one of our guests, who shall remain anonymous. What happens on tour stays on tour!

On a previous tour last year we had enjoyed an incredibly good potjie meal at this venue, so we decided that a repeat would be in order and this time round it was even better. They laid on a marvellous spread for us - two different potjies with salads and home made bread that just been baked. A real feast.

The rain got heavier as the night wore on and at 05h00 the next morning the storm peaked with very heavy rain coupled with strong wind. I was already getting a little worried about the effects of the rain on the next day’s routing.

We head east from Grahamstown to drive a big pass between the settler town and Peddie. This very long pass of 21 km offers wide scenery over the Great Fish River valley and due its excellent engineering allows plenty of time to safely enjoy the views. Most people that drive this pass have no idea its a major pass, nor do they know about the rich history.

Words of wisdom: "The pessimist sees difficulty in every opportunity"

Hi Robby. The photo of Coffee Bay.....is it a resort with camping fasilities?

Nope. That photo I took from the reception area at the Ocean View Hotel. I believe there is camping in the area though. May I suggest that you give the hotel a call. They are very friendly and will help you I'm sure. I'm also aware that there is camping near Hole in the Wall, but please check out the security situation before you commit.

Nope. That photo I took from the reception area at the Ocean View Hotel. I believe there is camping in the area though. May I suggest that you give the hotel a call. They are very friendly and will help you I'm sure. I'm also aware that there is camping near Hole in the Wall, but please check out the security situation before you commit.

robbie, how do i go about signing up for the up coming wild coast tour

However is see the website says it's sold out robbie, how do i go about signing up for the up coming wild coast tour

The tour was sold out, but there will more than likely be a cancellation or two as people have a knee jerk reaction to Covid 19. By the end of April we should have certainty about travel restrictions and at that time we will establish how many want to cancel. We anticipate there will be one or two, so they chances are good. As soon as we know, we will open the requisite number of tickets. I will make sure that I post that information here as well.

thanks, i will be watching for updates.