Which brings me to another question: did you replace your spare with a 14" rim or are you keeping a 13" as spare? I'm looking at replacing the 2 wheels on the van and keeping the spare in a 13". This will then be used as an emergency measure until the first possible place that can repair thr original.
👍
0
💔
0
😮
0
🙂
0

I fitted the new steelies today. Now the problem is that both sets of  rims has a larger hole in the centre than the one on the hub?????? There is also no spigot ring available for the steelies. What do I do now? just check the wheelnuts every 200km's?

What was the offset on your mags, RD? According to the post you had little clearance at the back of the wheel with a 0 offset. I'm guessing your mags has a 40 offset? 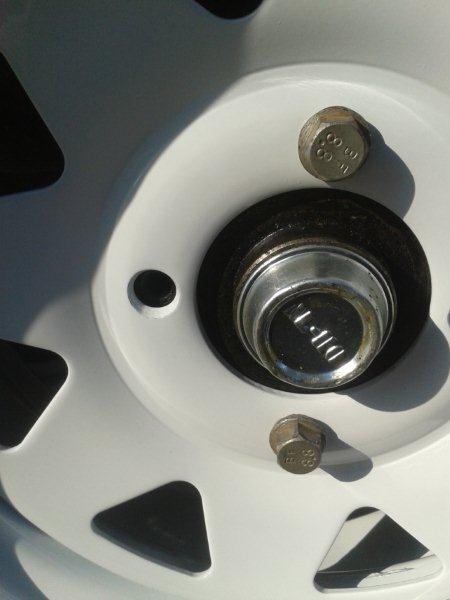 29 May 2015 @ 13:12:56 pm
RD
Platinum Member
85% Profile Strength
Posts: 260
Joined: 07 Jan 2014
Experience: 29 years
Franki, I would say as long as you exceed the requirements of the manufacturer, you should be OK. My caravans original tyre from factory was 185R13. As these tyres are no longer available and the only available tyre most of the time is a 165R13C, the tyres I have installed exceed the requirements (185R14C). From a safety point of view, I am satisfied with this modification and I have peace of mind using a local tyre instead of those other foreign brands.
👍
0
💔
0
😮
0
🙂
0

Had a chat with the workshop manager at Sunseeker Alberton. Most vans have that gap between the rim and the centre from the drum/hub.  Meaning the wheel only gets held to the drum by the nuts. He said the correct torque for the wheelnuts should be around 105 to 108Nm

90 Nm should be far more acceptable than 120 or whatever was mentioned on other posts above. The problem is that with the torque exceeding 90 Nm, a process called "stretching" will happen which has 2 problems:

1. The nut will be stretched by the second or third "fitting" so much that it may be weakened and eventually break. In cases where stretching is used as part of the torque (i.e. on engine cylinder heads etc.) such nuts are used only once and thereafter discarded.

2. Stretching will also influence the pitch of the thread on the wheel bolt / nut (depending which is used), which will affect the pitch on the wheelbolt or drum and may lead to cross-threading when used over and over again.

I also frown upon the idea of "checking the wheel nuts before every run". Once a wheelnut/bolt is properly thightened, (to the correct torque) it should not be re-checked. Re-checking has the problem that EVERY TIME this is done, the nut is tightened ever so more which will eventually lead to the 2 problems mentioned above.

We have done many an experiment of the above point, and NEVER was a nut/bolt left with the original torque .....

As an aside - with the issue listed above where the centre of the wheel rim is bigger than the centre piece of the drum: I for one will certainly not be happy with that arrangement. It has been correctly said before that in such a case the wheel is attached to the drum by way of the bolts only and that can only lead to problems. The spigot also ensures to a large degree that the rim is properly aligned with the drum (or hub in case of disc brakes). I will definately recommend that, where proper sized spigots are not available, that such spigots be turned on a lathe.

04 Jun 2015 @ 13:47:34 pm
RD
Platinum Member
85% Profile Strength
Posts: 260
Joined: 07 Jan 2014
Experience: 29 years
My 13" white rims also had a big clearance between rim bore and axle. I just made sure that the wheels were never loose, especially the L/H side. I will try to find out more. The mags that I have installed have the correct spigot rings installed.
This is what I found on Google. Hope it helps.

Now some aswers to frequently asked questions:
• Wheels need to be alligned to match their center to the turning center of the axle. Otherwise the wheel ist running excentric when turning.
• There are cars (Mini Cooper) without center location. They locate their wheels just by the bolts.
• Modern cars have a machined wheel flange providing a center location for the wheel.
• The tolerance for the center location is 0,06 to 0,1mm. Giving the axle is for example 57,0 mm the wheel shall be 57,06 to 57,1mm.
• The spigot ring is just an aid helping to fix the wheel concentric to the axle. Once the tightened bolts are securing the wheel into place the spigot ring is a useless passenger inside the wheel.
The spigot ring must be flush with the naive face of the wheel. If you have the problem as shown in the picture the you cannot get an acceptable runout. Even worse your lugnuts may come loose!

Thanks RD. I had a suspicion that the spigot ring had little effect on the fastening of the rim to the hub. The spigot would have to go on real tight to be "effective". That would mean you'll have to hammer the rim of the hub when changing the tyre. 08 Jun 2015 @ 10:23:42 am
RD
Platinum Member
85% Profile Strength
Posts: 260
Joined: 07 Jan 2014
Experience: 29 years
pwven,you are correct. SAFETY FIRST!!! When I was looking at the 14" tyres I came upon something very interesting. When checking the load ratings on the various commercial tyres (185 14C) I could not believe the difference in the load ratings as well as the ply ratings. Be aware when buying a commercial, do not assume that because it is a commercial tyre that the ply and load rating is suitable for your use on the caravan. Remember, these are after all "Bakkie" tyres! Check the actual ply and load rating on the tyre first that will be suitable for your caravan. Ask for advice from the tyre fitment centre if you are not sure, I did!! That is how we learn and stay safe!
👍
0
💔
0
😮
0
🙂
0

I had 2 tyres fitted at Supa Quick today. Fitted the wheels to the van and found I had 5 fingers space at the top of the tyre. I couldn't do a precise measurement of the ground clearance, but guess I gained around 30-40mm.

Haven't checked yet as the van is standing at a secured parking lot.. Currently I'm using a 8 hole dropplate as my bakkie has been raised. Maybe I'll get a bit of nosedown on my van. I did not see any body mension the wheelalignment on the caravan after putting spacers to lift the van ,when the new tyres run down on one side people are going to ask what now

Do you have any photo's? How much more is the van lifted by?

Unless you are changing the rim diameter for want of safety benefits, I gather it is best to try to replace with what the manufactures recommend or what originally came with the van.

Unless you are changing the rim diameter for want of safety benefits, I gather it is best to try to replace with what the manufactures recommend or what originally came with the van. 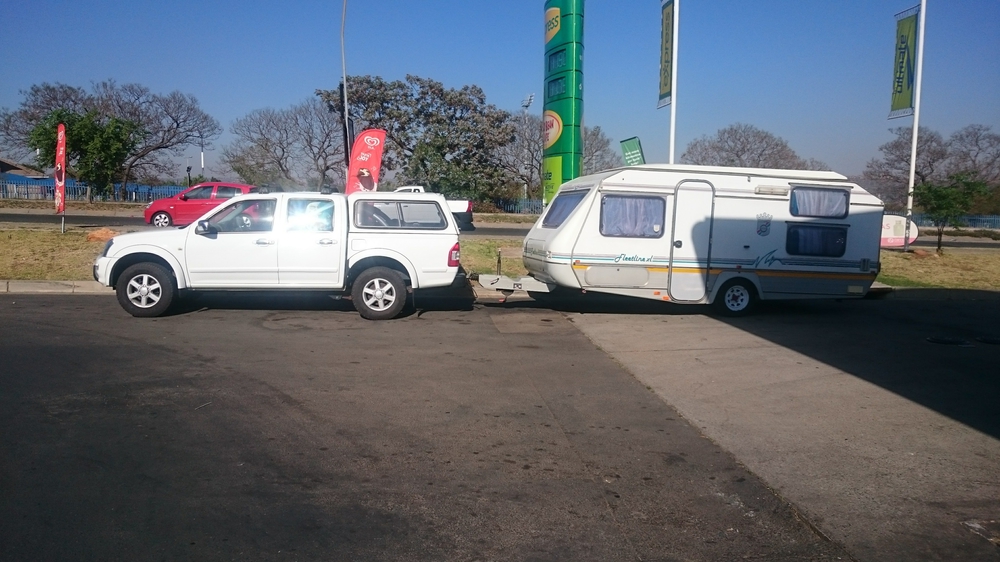 This is my new favourite thread...  Looking to raise the height of my Fleetline XL just a bit, and I think the spacer/14" upgrade will do the job. Greg, jou will have to check whether or not you enough clearance in the wheel arch, and also, if a spacer will fit onto the chassis.

Not all chassis can take the spacers.

Greg, jou will have to check whether or not you enough clearance in the wheel arch, and also, if a spacer will fit onto the chassis.

Not all chassis can take the spacers.

Greg I think if you start looking for spacers you will find only 40mm spacers are sold by the caravan workshops. I wanted to lift only 30mm and nobody could supply. I still feel the standard mild steel spacers are way over priced vs the cost of the steel and 2 holes or better 2 slots in the spacers.

Had 20mm spacers fitted when the van was in for a service. About R500 all in, so no too bad.

Wheels still look tiny, but the extra height has made a bit of a difference... Going to keep it like this for a while and see how it goes.