Herman welcome to the forum.

Post soem pics as you get along with van - please Incase any of the CaravanParks.com Forums Members wants to know what a Fairbanks Morse is, that Herman was talking about, and just as I wanted to know, the following is an extract from Wikipedia.

Fairbanks Morse and Company was an American manufacturing company in the late 19th and early 20th century. Originally a weighing scale manufacturer, it later diversified into pumps, engines, windmills, coffee grinders, feed mills, locomotives and industrial supplies until it was merged in 1958. It used the trade name Fairbanks-Morse.

A hit-and-miss engine is a type of four-stroke internal combustion engine that was conceived in the late 19th century and was produced by various companies from the 1890s through approximately the 1940s.

Hit-and-miss engines were made to produce power outputs from 1 through approximately 100 horsepower (.75 - 75 kW). These engines are slow speed and typically ran from 250 revolutions per minute (rpm) for large horsepower engines to 600 rpm for small horsepower engines.

They were used to power pumps for cultivation, saws for cutting wood, generators for electricity in rural areas, running farm equipment and many other stationary applications.

If you are interested in getting one, JUST FOR FUN, there is one for sale on OLX. 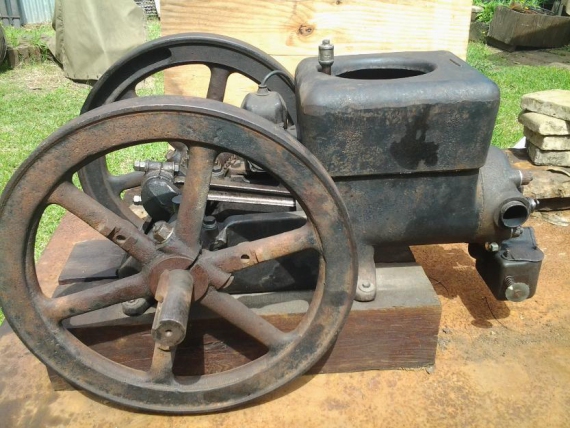 Looks like a bargain, and I'm sure we all want one! Could come in good use with Eishkom Poper Outages! On Galleries - you are welcome to upload as many as 50 photos in a gallery.

Go to your Dashboard, click on "Create New Album" and upload. Once uploaded, and you want to load some more on the same Gallery, click on "edit an album"  the click on the album you want to add photos to - WALLAH!

Or start a new gallery - you can have numerous galleries.

Remember to give each gallery a name / title. Gee, I wish I had the patience and skill to do work like that! Your stories are wondeful as well as the pictures. Can't wait to see the end product. Your restoration work is also excellent.