11 Mar 2015 @ 14:26:25 pm
Chuck
Bronze Member
74% Profile Strength
Posts: 6
Joined: 16 Feb 2015
Experience: 23 years
Hello All
Please can someone advise where i can buy taillights for my 1992 Sprite Super Sport
The inside contacts are completely corroded and the globes don't make proper contact, i have tried cleaning them with fine sandpaper but the contacts just break off

alternatively any suggestions would be appreciated
Regards
Mark 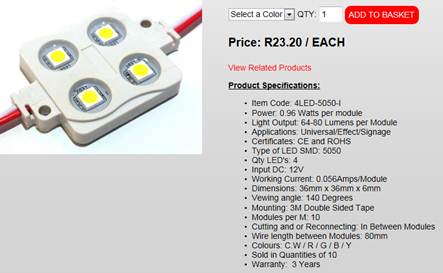 Wilsur please can you advise where i can buy the 4 LED, the ones in the first picture above

is it also auto style

I have those and have been playing around with replacing them as well. I would like to put in an LED unit, but the lights are part of a moulded unit, the same as in the picture. Struggling to find that size as an LED unit. Plenty of units around, but all the wrong shape, which will leave an ugly gap.

Chuck, you can get those replacements from the caravan dealerships, but rather get some more modern technology, since the old ones are badly designed.

Having said that, Wilsur's idea would work. As I understand it, the casing would remain, but the bulb set-up would change.

Wilsur, how would those be wired in?? Just splice into the existing wires?

13 Mar 2015 @ 10:20:04 am
RD
Platinum Member
85% Profile Strength
Posts: 255
Joined: 07 Jan 2014
Experience: 29 years
Hi Chuck, welcome to the forum. A few years ago I had a 1982 Sprite Musketeer that had the same tail light housing units as yours except they were black. Back then I purchased new housings which were black and tail light lenses from Delta as the old Isuzi bakkie had the same tail lights. The tail light lenses differed slightly as the one block was clear for the reverse light on the bakkie. Not sure if you would still be able to obtain theses units from Delta if you want to keep the standard light layout on the caravan.
👍
0
💔
0
😮
0
🙂
0

13 Mar 2015 @ 10:43:00 am
Chuck
Bronze Member
74% Profile Strength
Posts: 6
Joined: 16 Feb 2015
Experience: 23 years
Hi RD,
thank you i would really appreciate it
so many options when it comes to the LED i am not sure which way to turn
generally the 4 LED pad is only 0.95 watts and i don't think this would be bright enough
you do get a spot LED which is 3 watts and this might be ok i am trying my best to keep the original housing and only change the inside thus not having big gaps on the sides.
happy hunting and hoping you find them
once again thanks to all for all the suggestions

Remember that LED's are much more efficient than normal filiment bulbs, 0.9w LED's might give you the same or more Lumens than a 21w bulb. You need to compare the light output (Lumens), not the watage. Thank you all for the suggestions and comments, i can now say that the tail light is fixed and 100% working, Thank you RD for the parts
Ready for the Easter weekend
Have a great day all
👍
0
💔
0
😮
0
🙂
0