The most haunted mountain pass in SA! 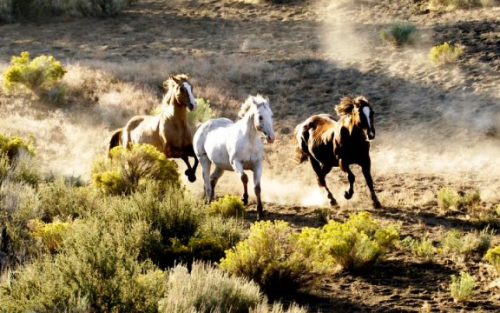 Moordenaarskloof where horses thunder down the pass at midnight

The week that was!

* The festive season is over - it's back to work!

* Report back on the final leg of our recent Lesotho Tour.

* Podcast - Listen to a talk on the impact of social media


The silly season is over. We hope your waistline coped with the onslaught, but more seriously that you managed to survive the roads. We haven't received official accident figures yet and it's not our station to report on bad news, so I'm sure you will hear the statistics on the main stream news channels.

Driving past the Letseng mine is similar to the mines on the Witwatersrand, except the man made mountains are grey instead of cream coloured. Once past Letseng there is a long and steady descent to the main town in the area.

Mokhotlong is located in the mountainous north-eastern part of Lesotho. The name is a Sesotho word which means "Place of the Bald Ibis". Thabana Ntlenyana, the highest point in southern Africa, is found near the town.

Mokhotlong’s role as a police post first brought people to this part of Lesotho in 1905, and it developed into a trading centre for the Highlands region. However, it was preserved from major development by its remote location. Not until 1947 was radio contact established with Maseru, the capital city. An air strip was built and a road cleared through the town to link Mokhotlong with the rest of Lesotho, but even so, it continued to be outfitted with provisions and supplies by pack mules from South Africa via Sani Pass.

Our convoy rumbled on to reach the 14th pass of the tour - the Kotisephola Pass (or Black Mountain Pass).

This is a mega pass by any standards. It's very long at 32 km and displays an altitude variance of 1066m. With a summit height of 3244m ASL, headaches and nose bleeds might be experienced by travellers from the coast who have not had time to acclimatise.

Packed into that length is a total of 139 bends, corners and curves of which 8 have angles in excess of 90 degrees and of those, 6 are hairpin bends, all of which occur on the south-eastern section of the pass. The pass is subject to lots of snow in winter and ice on the roadway will make things highly dangerous, even for 4WD vehicles. Chatting over the two way radios we recalled driving this pass in 2012 whilst construction was underway and the very odd sight of seeing Chinese trucks and road building equipment as well as Chinese nationals doing the manual labour. We never saw a single local employed on these projects.

Rumours abounded at the time of the Chinese labourers being convicts. After completing their "sentence" it was said that they were then free to live in Lesotho as free men but were not allowed to return to China. Whether any of these stories were fact or fiction, we do not know. But what we do know is that the time it took to drive the pass then and now was about 80% shorter. The roads are actually excellent and a real pleasure to drive on.

It didn't take long and we arrived at the Lesotho border post at the summit of the Sani Pass. We stopped in at the highest pub in Africa for a bit of refreshment. We could not have wished for more perfect weather and for your scribe this was the first time ever traversing this iconic pass in clear weather. What a treat.

High on the Drakensberg escarpment, on the border between South Africa and Lesotho, Sani Mountain Lodge (previously known as Sani Top Chalets) offers comfortable accommodation beneath a sea of stars at night and breathtaking landscapes during the day. Sani Mountain Lodge boasts stunning views, cosy fires, adventure, and great hospitality.

We mounted the GoPro on the roof and began the highlight of the tour - the much anticipated descent of the Sani Pass. It did not disappoint with glorious forever views and some technical driving. The pass was quite busy and several calls were made to wait ahead of a hairpin for an upcoming vehicle to get past our oversized convoy. The results of this videography will soon be seen once we release the brand new multiple-part video series.

Sani Pass is the mother of all South African mountain passes. Statistically and in every other sense, it out-distances, out-climbs, and out-performs all of its competitors with consummate ease to have become the most iconic gravel pass in South Africa.

Sani Pass was originally developed as a bridal path in 1913, and was primarily used as a trade route between South Africa and Mokhotlong. All goods were carried by pack mule. 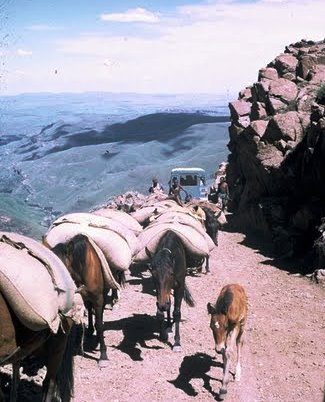 You can still see pack mules on Sani Pass

Sani Pass was pioneered as a vehicle route on 26 October 1948 by an ex-Spitfire pilot named Godfrey Edmonds, when, aided by labourers armed with ropes and assorted blocks and tackle, he manhandled a war-surplus Jeep up the path in an exercise that took about six hours.

Sani Pass starts at 2876 metres and descends 1332 vertical meters to reach the foot of the pass at 1544m. Sani's average gradient is only 1:20, thanks to a long easy gradient section in the foothills of the Drakensberg, but certain sections are as steep as 1:4 and it is here that most drivers come unstuck when the going gets slippery. The large number of car wrecks down the ravines bear mute testimony to the dangers.

Many visitors travel from abroad to tackle the notorious Sani Pass in hired 4x4's. Such is its reputation. For most South African's it remains more of a dream. There has been talk recently of tarring the Sani Pass. There was an immediate rash of objections from a range of individuals and societies interested in preserving the true, raw nature of the area, but I presume that ultimately, progress will have its way. Should the tarring project go ahead, the challenge and allure of the Sani Pass will move from a tough 4x4 route to a casual afternoon drive in a hatchback. Whilst it's still there, make a plan, and drive the Sani. It will leave you feeling like a child - in its sheer size and scope. The pass holds an attraction for advertisers too - recently two TV commercials were filmed on the pass for Nissan and Ford vehicles respectively.

The official border between Lesotho and South Africa is at the top of the pass. Several books and websites incorrectly list Sani Pass as being inside Lesotho, because the South African border control post is at the bottom of the pass.

Residents from Lesotho still use donkeys extensively as their primary mode of transport. Donkeys are used to lug basic foodstuffs and provisions back up the pass after having been purchased in South Africa. This lends a new meaning to mule shopping versus mall shopping! Please be patient and give way to the animals.

The Sani Pass remains as the most iconic pass in South Africa and the only factor that has the potential to remove that title is the possibility of the pass becoming tarred. Our take remains positive and even if the pass does get tarred, it will open it up to a vast new audience, which will boost local tourism and benefit the region considerably. Yes, the pass in its gravel form is for the purist and the 4x4 driver and this allure will be highly diluted, but there are more than enough other big gravel passes to satisfy that need.

Formalities at the South African border post were efficiently handled and we were soon on our way to our final overnight stop - the Premier Sani Hotel. It's come a very long way from when I last stayed there in 1988 and is now a luxurious 4 star hotel. Our final drinks, prize giving and dinner was held in a convivial atmosphere and so ended one of our most successful tours of 2019 and one that we will undoubtedly be repeating in 2020.

Podcast: The impact and future of social media and the last day of the Bedrogfontein Tour. Click here to listen.

The past two weeks we have featured two back to back passes; namely the Suuranysberg Pass and the Kouga River Pass. Both of these must be driven in order to get to Moordenaarskloof Pass. The ghoulish story relating to a savage murder that took place there on January 15th, in the 1800's makes driving this pass all the more fascinating. This amazing little pass has one bend every 67 metres - a South African record. Did we mention it's a dead end?

Words of wisdom: "The pleasure we derive from journeys is perhaps dependent more on the mindset with which we travel, than on the destination we travel to" - Alain de Botton

Rob thanks for your terug voer altyd leersaam

On our way to Sani Pass again on Friday for a "quick" 2nd up and 1st down trip. I am a bit nervous about the trip after seeing the video of the recent rainstorm in Sani but will just take it slow and let the DAC do its thing on the way down.

I really enjoy and appreciate your info on Lesotho. We did a quick 2 day trip to Katse Dam in 2018 but plan to go back for some more adventure soon.