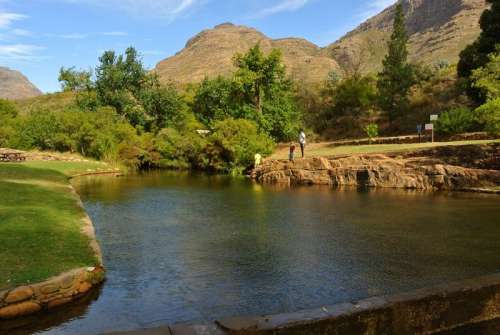 Click below for all the details and online bookings:

The gravel back road between Clanwilliam and Algeria is probably the most underrated road in the Cederberg. The road twists and turns through a steep and rugged valley with 1000m high mountains on either side. Thick bush interspersed with citrus orchards keep one company as the road heads southwards following the course of the Rondegat River.

Somewhere near the lovely Jamaka campsite, the valley suddenly displayed the mountain slopes smothered in blue flowers as far as one could see - almost to the 700m contour line. Apparently these flowers are typical in the spring after a mountain fire the previous summer. It really was a sight for sore eyes. High up the slopes on the right the scar of the Nieuwoudt Pass (also called the Cederberg Pass) can be seen, which is the more popular route to Algeria from the N7.

Algeria forestry station and campsites took a major hammering in the big fires a few years back, but it's back on track with new chalets and a smart reception area. Algeria is probably the most popular campsite in the Cederberg and early booking is always required.

From Algeria the road has been brick-paved in the last 8 years, in a community employment project which has now included the Uitkyk Pass as well, which makes it a real pleasure to drive with time to enjoy the sensational views looking north towards the Clanwilliam Dam.

We made it back to Mount Ceder exactly according to our ETA, which allowed guests time to relax before another wonderful meal laid on by Mount Ceder. The meal was preceded to an informative chat on the olive industry by the farm owner and the various varieties were tasted. Another perfect, calm, starry night in the Cederberg ensured a sound night's sleep.

The final day of the tour had the convoy heading to Kromrivier farm, via the Truitjieskraal road for a pre-arranged brunch - and what a magnificent spread of farm fresh food we were treated to! Next up was a visit to the Stadsaal Caves not far from Kromrivier, where we spent an hour exploring the fascinating rock formations. All good things must come to an end, and the time had come to head home, but the passes were still there to be enjoyed on the return journey ~ Kromrivier Pass, Grootrivierhoogte, Blinkberg, Gydo and finally we were back in Ceres at our starting point.

This was another hugely successful tour and a pleasure to see how relaxed all the guests were after three days of fun and adventure. We won't discuss the singing competition on the Sunday morning! What happens on tour stays on tour!

The newly-formed Union of South Africa had very few good reasons to fight for the British during World War I. Many of its citizens were still bitter about the recent Anglo-Boer War and the subsequent discovery of the concentration camps in which thousands of women and children had died. Great Britain continued to be viewed as an enemy.

But when the war started on 28 July 1914, the Afrikaner-led government unhesitatingly joined the side of the Allies against the German Empire. Prime Minister Louis Botha and Defence Minister Jan Smuts, both former Anglo-Boer War generals that had fought against the British, became active and respected members of the Imperial War Cabinet.

The South African Defence Force saw action in a number of different areas. It dispatched part of its army to German South-West Africa (now Namibia), expelling German forces and gaining control of the colony. A military expedition under the command of Jan Smuts was sent to German East Africa (now Tanzania) to fight the Germans in that country, primarily with an intent to capture the elusive General von Lettow-Vorbeck and his troops.

South African soldiers were also shipped to France to fight in Europe. The most significant battle in which the South African forces on the Western Front took part was the Battle of Delville Wood, in 1916. They also saw action with the Cape Corps as part of the Egyptian Expeditionary Force in Palestine.

South Africa played a significant role in the Allied victory through its contributions in Africa, western Europe and the Middle East. Its ports were important rest stops, refuelling stations and strategic strongholds of the British Royal Navy, helping to maintain control of the vital sea routes around the Cape of Good Hope.

[Researched and written by Mike Leicester]

As we are away driving the Ben 10 Eco Challenge this week, we thought it would be fitting to feature one of the challenge passes. This one is white-knuckle steep. Check it out.

Words of Wisdom: "Because in the end, you won't remember the time you spent working in the office or mowing your lawn. Climb that bloody mountain!" - Jack Kerouac

The history of our region is always of interest.

Many of us grew up knowing the "OKAPI"  folding knife, which was originally made in Germany for the German soldiers, including those based in G S W A during the 2nd world war. ( Still one of the best value for money Knives you can get. )