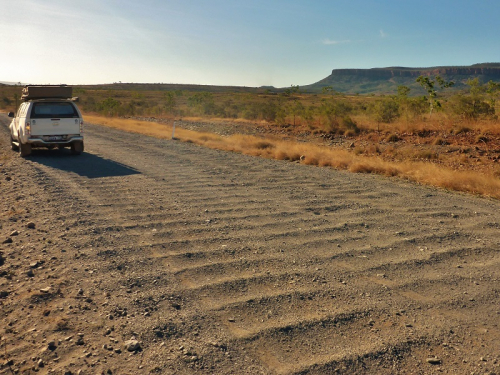 * Corrugations - the one feature of gravel roads that no-one enjoys. We show how how to beat the bumps.

* Podcast - a discussion on a range of topics from tiger fishing to Thomas Bain.

For those of you in the Western Cape or anyone from inland coming to the Cape for the holidays, we are putting on a spectacular final tour of the year on Sunday 30th December, 2018 that makes for a perfect opportunity to get the family out for the day before the New Year celebrations begin. The tour includes a full ascent and descent of the Langeberg mountains (1493m ASL) on a private road not normally open to the public. We got special permission for this one, so it promises to be a fantastic fun filled family day that will include a range of other passes, mostly gravel, as we work our way through a wide 165 km long loop along the Karoo escarpment. Our last 3 tours were all sold out within 48 hours, so book online right now: LANGEBERG CONQUEROR TOUR

As many South Africans gear up towards the annual holiday rush to the coast, we are focussing on road safety - not just on the tarred roads, but especially on the gravel back roads. In today's news letter, we have a look at the topic of corrugations and how best to deal with them. Corrugations are abhorred by all drivers (and passengers) and can ruin a great country style drive, but there is a way to reduce the shaking and improve the ride. Corrugations are one of the main culprits causing rollovers.

It won't be the gnarly hills, flooded river crossings or the axle deep sands of Namaqualand that test the endurance of your vehicle, but the gutted corrugations of the roads that lead to many iconic off the beaten track destinations.

It's these corrugations that will see mirrors rattle apart, aerials come adrift, roof racks rub through paint and the contents of your camping kit eventually disintegrate until they resemble nothing of the finely organised packing system that you started with.

There are a hundred theories on how dirt roads become corrugated and they encompass everything from over-zealous truck drivers, to braking too hard before corners, to overloaded vehicles and over inflated tyres. Regardless of how corrugations form, driving on them is uncomfortable and eventually shakes your vehicle to pieces.

If you plan on travelling the backroads of South Africa then you are going to encounter endless kilometres of corrugated dirt roads, but you can take a few measures to reduce their bone-rattling affects.

Get Your Tyres Down and Your Speed Up

It's not often that you're advised to go faster during an unpleasant driving experience but it is fact when driving over corrugations that 60kph may be a lot more comfortable than 30kph and 80kph - 90kph may be even better. We aren't suggesting you belt around the bush at 140 because when you eventually put your car on it's roof - you'll blame us, but there is a distinct speed that is 'right' for every vehicle.

The key is to synchronise all the elements of your car with the corrugations - the pressure in your tyres, the weight of your car and its suspension and handling characteristics. Finding the best speed for your particular vehicle will see these variables all align in some sort of harmony that sees you floating on top of the corrugations rather than rattling between them.

Of course this increased speed and increased comfort means your tyres are spending less time in contact with the road. Be aware that too much speed will cause the vehicle to 'drift'. Driving over corrugations requires finding a balance between comfort and control.

Tyre Pressure is Everything

Reducing tyre pressure turns your tyres into big cushioning shock absorbers that soak up the bumps and smooth out the ride. There is no golden number for the correct tyre pressure for either tar or gravel roads. Each vehicle is different and each tyre is different. Inflation pressure should be adjusted to load. A big fully laden 4WD may require as much as 2.0 bar in each tyre to accommodate the load while a small city commuter may find 1.2 bar is all that's required.

As a general rule of thumb try decreasing tyre pressure for corrugations by about 20 percent. If you're running 2.0 bar on tar, try 1.6 bar for corrugations. Lower tyre pressures and high speed creates heat build up in tyres which can cause damage or premature failure. Under-inflation can also cause tyres to 'roll' off the wheel when cornering. Don't reduce so much pressure that the tyres look flat. Just a slight bulging of the sidewall is all that is required.

Corrugations are worst where people brake or accelerate. For instance: the entry and exit of corners, the crests of hills or the entry to river crossings.

Country roads often run through wide open expanses where visibility extends for miles and on-coming traffic can be seen well in advance. There's no need to slavishly 'stick to the left' if it means you must drive on the worst sections of the road. Pick the smoothest line and anticipate badly corrugated sections by the changes in the road. By anticipating the changing conditions you will slow down naturally where required, without braking, and create a smoother ride.

Logic says that 4WD is the safest and most stable method of traversing loose dirt roads and in reality it probably is. Of course not all corrugated roads are slippery gravel or powdery dust and hard-packed, well compacted dirt byways can offer similar levels of traction to that of tar or concrete. If safety is paramount then select 4WD. At MPSA we always drive in 4WD on any dirt surface.

[Adapted from an article on OutbackCrossing.com]

Listen to the podcast:

This week we discuss a range of topics - Sani Pass; Jozini Pass, Ben 10 Challenge, New search functionality and the Rooihoogte Pass on the R318.

LISTEN TO THE PODCAST

We recently refilmed this high altitude pass on the R318 between the N1 near Touws River and the town of Montagu. We have reconstructed the entire page and are sure the history will pique your interest - especially the fact that all four versions of the pass dating between 1800 and 1967 are still visible along parts of the pass but clearly visible on Google Earth if you follow Mr. Coyne's hand drawn map.

Robby you are probably one of the South Africans that has traveled most of the roads in SA, whether they are tar or gravel. The info on the lowered tyre presure can surely help but one would not always think that to increase the speed can help with drive comfort as well.

Proof of the pudding lies in the eating they say.

Thanx again for the passes info.

Thank you Leon - We practice a philosophy of sharing our knowledge to the benefit of all. So often experience allows you to discover little secrets of how to cope with certain conditions on the road. Tyre deflation is contra to how most people feel. When we run tours, I can see the reluctance of drivers when I ask them to deflate tyres.

I also felt the same way the first time I was given that advice. In our case it was neccesity that was the mother of invention as our video footage was just too shaky to watch. Reducing tyre pressures was a miracle cure for that problem and from there it s a hop, skip and jump to realise that your vehicle and passengers benefit too and we have only ever lost one tyre (in the Richtersveld in  2010) in a total of about 500,000 kms.

I also lower my caravan tyre pressures on bad roads. When I get to camp the labels are still on the tins!

I grew up and learned to drive on corrugated gravel roads.

The faster you can safely travel over corrugations, the less time your tyres have to drop into the valley of the corrugation.

What also assists greatly, when you have a 4x4 and can engage difflock manually, is to drive in difflock. Especially on fixed axle vehicles, the wheels, when airborne, do not spin at seperate speeds from the others to cause left/right grip differences on an axle.

This makes for a much more stable vehicle on corrugations. Thanks for that tip. i will try that next time. My vehicle has 3 diff locks. It makes steering interesting withthe front locker on!

Thanks for that tip. i will try that next time. My vehicle has 3 diff locks. It makes steering interesting withthe front locker on!

I drove a Land Rover Defender this way on gravel with the centre difflock engaged.

This normally unstable vehicle on corrugations due to the solid axles, became as stable as can be, travelling at 100km/h where the road allowed this.

No winding up of axles and gears since the tyres are able to 'slide' on the gravel.

Obviously the road surface will determine when to disengage difflock, when windup is possible with short bends at low speed etc.

Robbie, I drive an 80 Cruiser which should be about the same mass as yours. What presure do you deflate to on corrugated roads?

I make use of deflaters set at 1.8 bar which seeem to do the job quite well, bearing in mind that they are still soft when driving on the tar in KNP. (Certainly not going to re-inflate at every camp we stop.)

Steamer - As a general rule i go down to 1.4 bar, but my Cruiser runs on Cooper ST Maxx. I seldom exceed 80 kph and that formula seems excellent. A lot will depend on the type of tyre and the way your vehicle is loaded. It's always best to start off conservatively, then keep experimenting until you find the sweet spot.

You drive a Discovery with all types of electronic trickery.

Just put your system on "grass, gravel, snow " and your vehicle will adjust the power transmission to the wheels and soften your suspension.

That is why those programmes are there for.

With my D3 S and D4 SE, I never lowered the tyre pressure. I utilised the offroad programmes and never had a problem. Still drove at 100km/h on the gravel. Ash, I see Proff has answered your questions bery adequately. I wouyld be concerned about dropping pressures on LP tyres much more than 20%.